This week's #MakeoverMonday looks at car insurance prices in the USA. Did you know Michigan has the highest average car insurance costs?
Fun fact, the insurance for my first car was £2,200. Thankfully it went down significantly over the years...
The original viz was a type of radial chart and it reminded me of this viz by Pablo Gomez on how much money big companies make per second.
Original 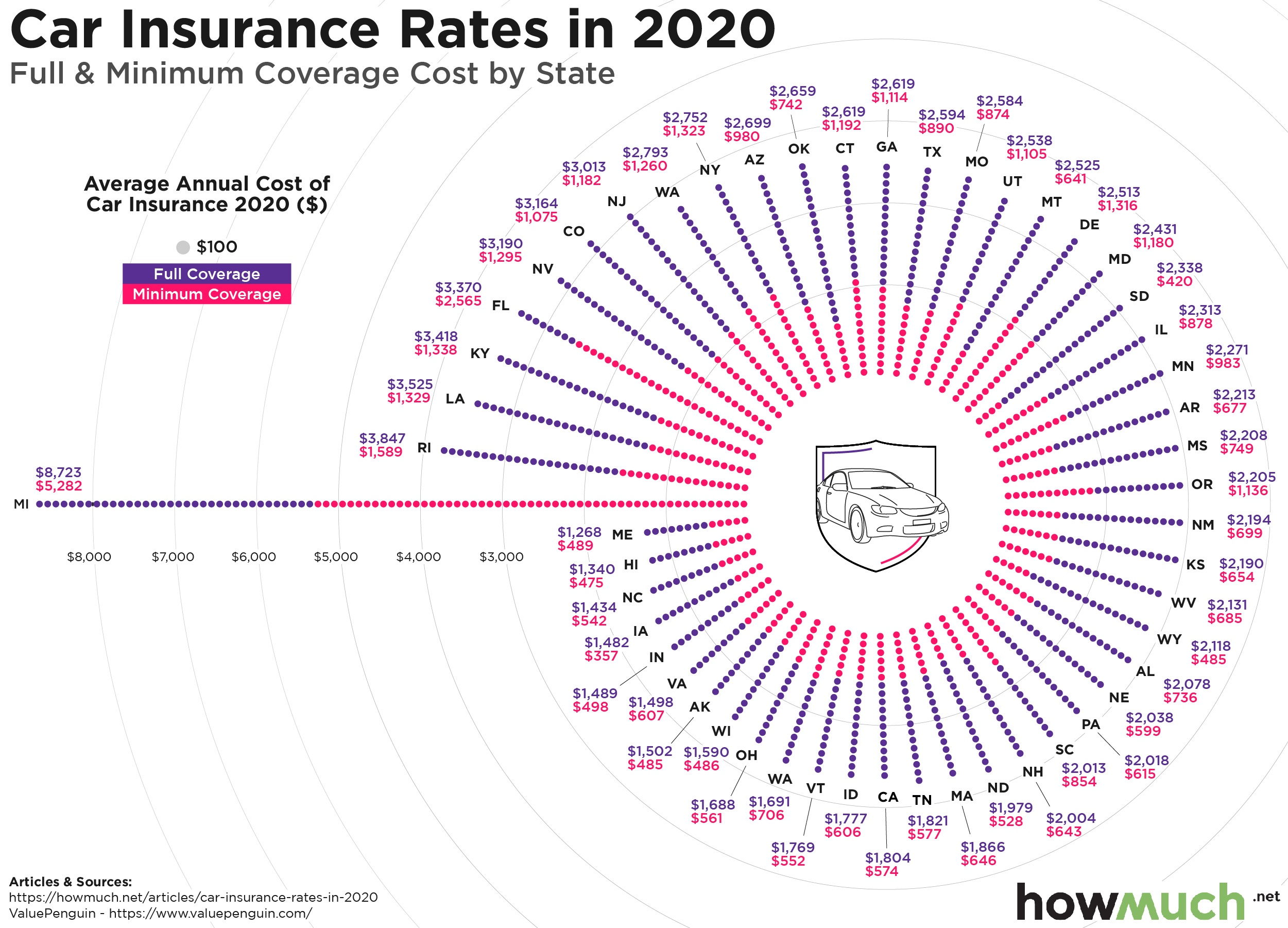 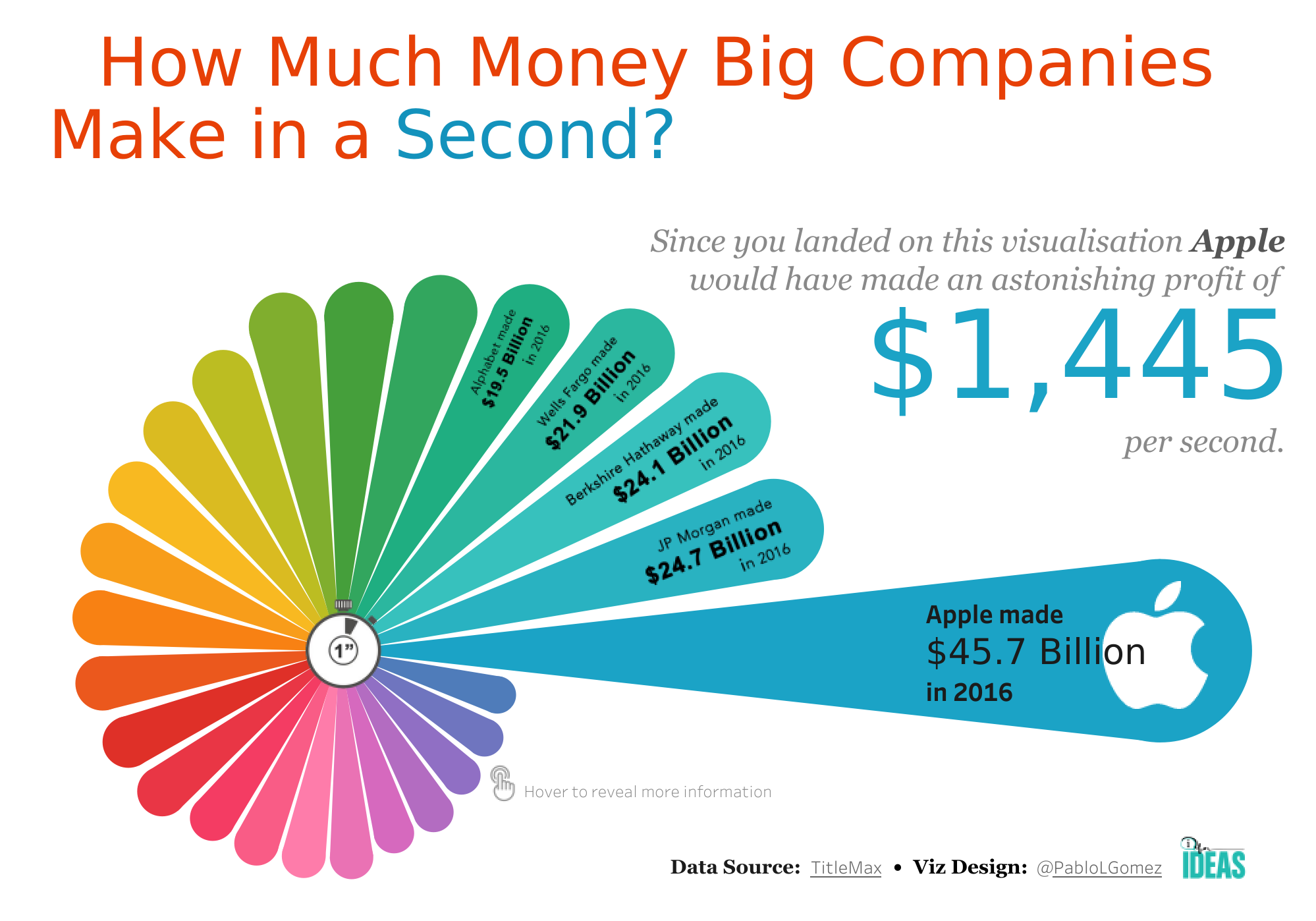 I had considered doing something similar but having played with Set Actions for the recent Workout Wednesday, I wanted to make something a bit more interactive.
Design
The colour palette came from this image I saw on Pinterest. I've recently created an account after seeing the Pinterest collections by Judit Bekker and Evelina Judeikytė in the Tableau community. I would recommend creating an account and saving anything you like as sources for inspiration in future as this is now helping me widen my thinking in terms of how to make more impact with my visualisations.
Although I used Figma to create the background, it could have been created in Tableau using containers and blank sheets.
I wanted to have 2 things
Background image 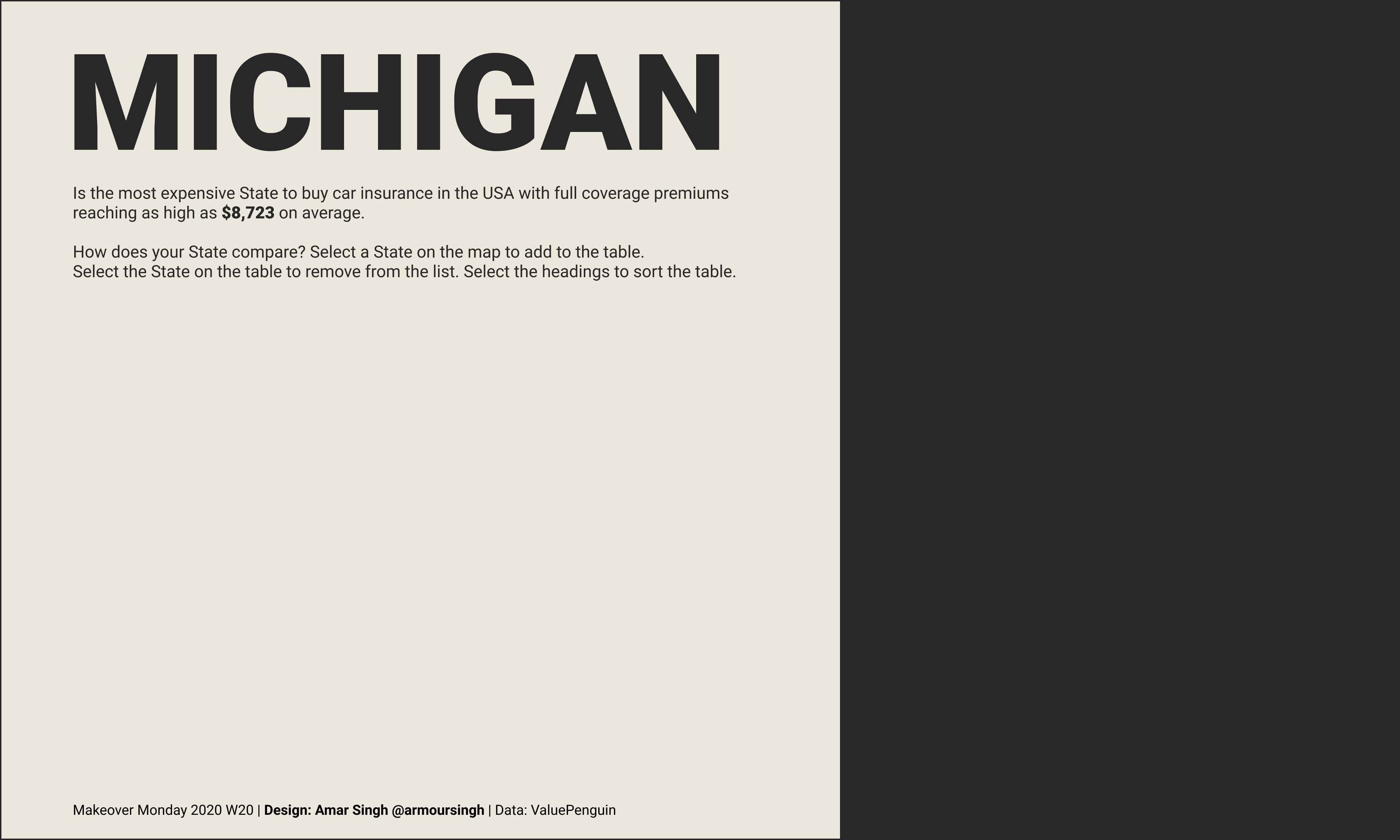 First challenge
Because the dataset contained Alaska and Hawaii, it meant the map looked bigger than I wanted. So I changed it to a hex map. 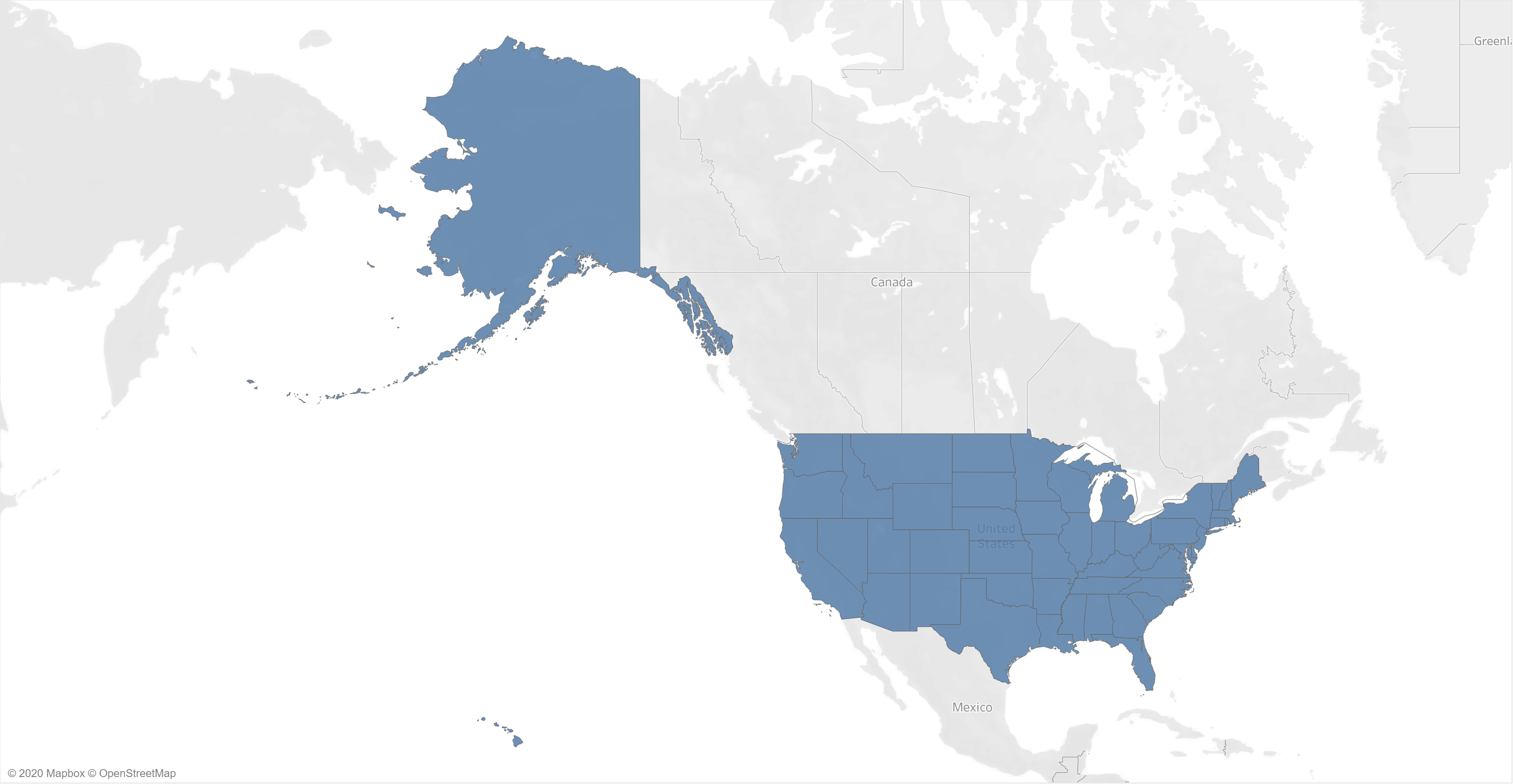 Hex Map
I already had a hex map file saved to my PC but you can download one and see a tutorial here. This was joined to the original dataset. As you can see from the image, the way the data is joined in Tableau 2020.2 is different from previous versions. This was a simple join so I have not had the chance to play around with the new data model, but you can read more about it on Ken Flerlage's blog post.
In my hex map file I had to change 'District of Columbia' to 'Washington D.C.' to match the original dataset, otherwise I encountered a null value for one of the tiles.

The below image shows the hex map worksheet. At this stage the size of the shapes are not important but they will play a big factor on the main dashboard. To understand why sizing is important for hex maps, please read point 3 on Kevin Flerlage's brilliant blog post Simple Steps to Better Design - actually read the whole thing as there is so much good content to digest! 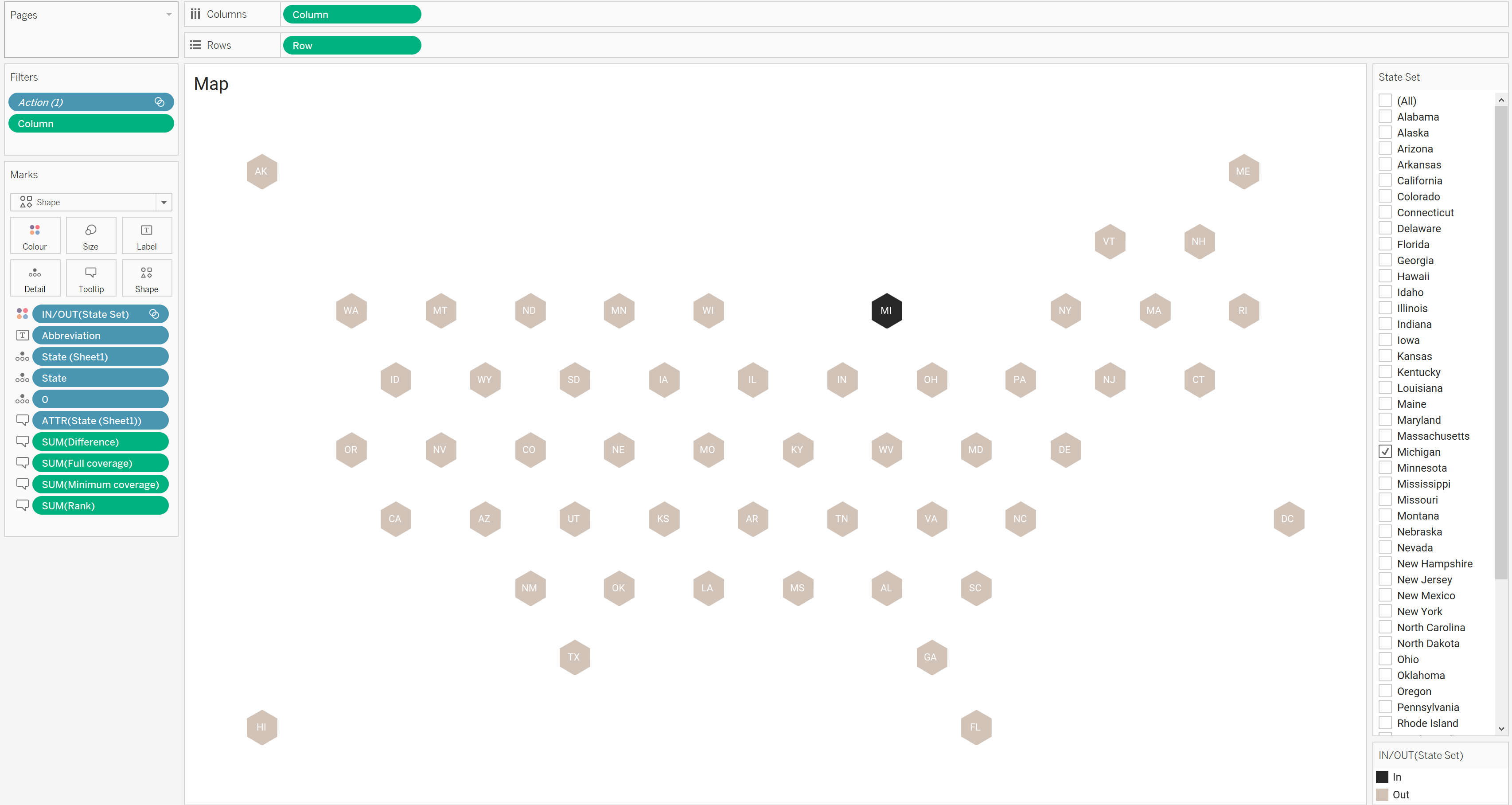 Table
The table would store the selected States from the Set and show the minimum and full coverage values, as well as the difference. I wanted the table to be a bit more visual and remembered seeing rounded bars behind numbers in Ludovic Tavernier's Modern Sales Dashboard which I had previously reverse engineered (as I bet did many!) when first released.
To create the rounded bar you need to have 3 measures - I created them in the pane but you can create calculated fields for them.
That's it.
Set the Mark to a Line and use Measure Names on Path. Remove all formatting. 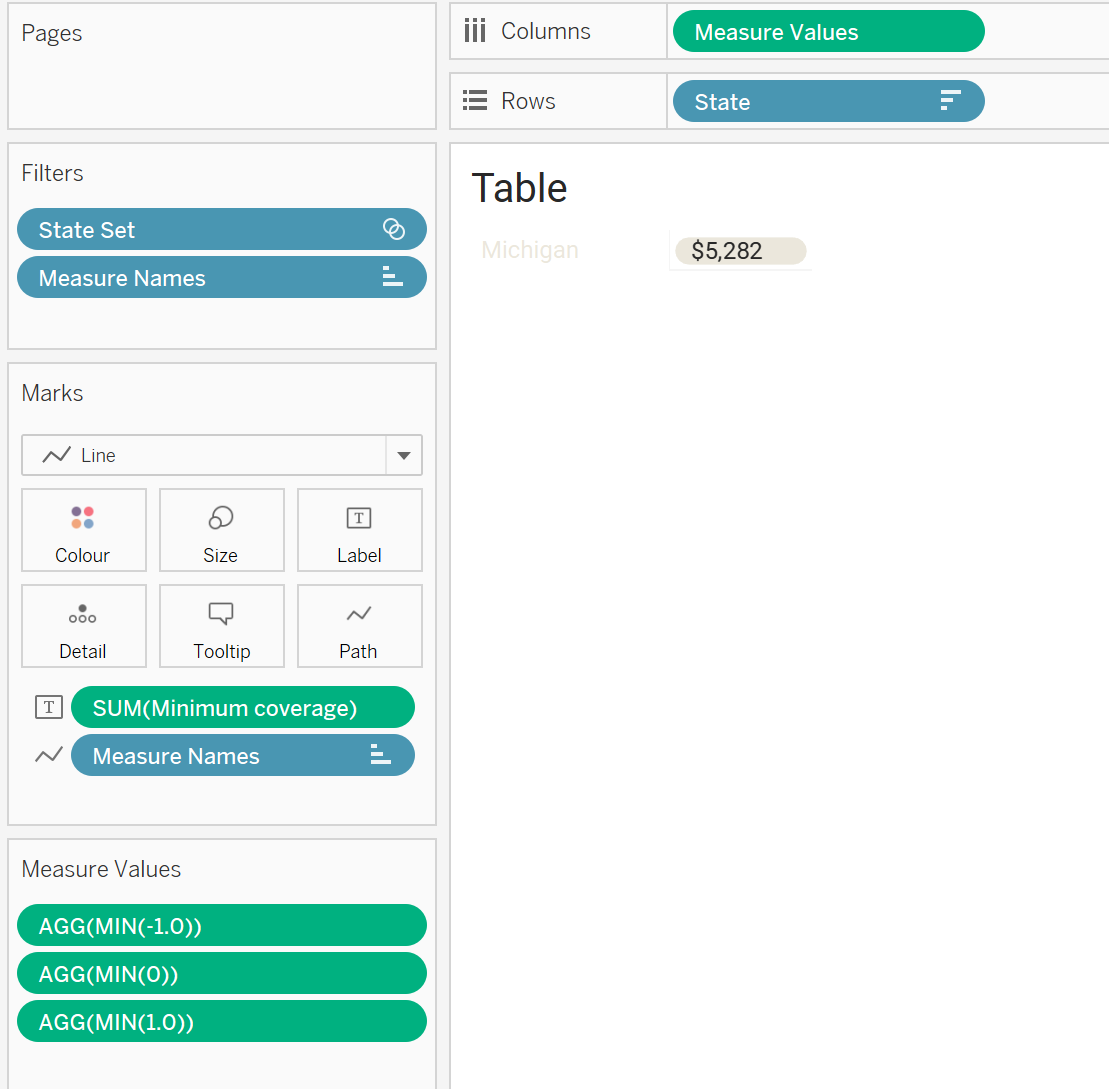 Then duplicate the pill twice by selecting Ctrl and clicking and dragging the Measure Values pill on the Columns pane next to itself. This then creates three pills for the three measures I want to show. Unfortunately you'll need to amend the formatting again but you can wait to do that after the three pills are on the worksheet. 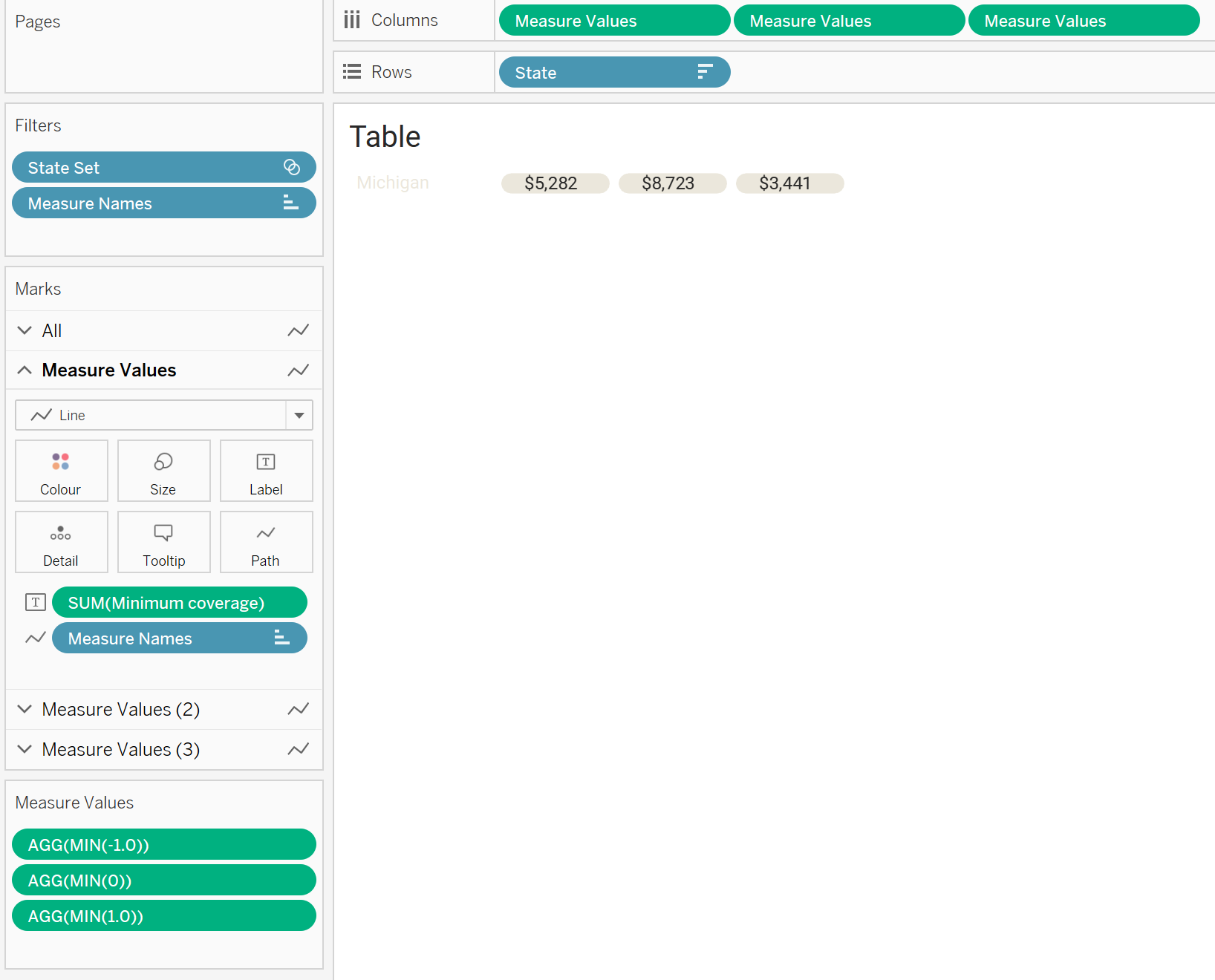 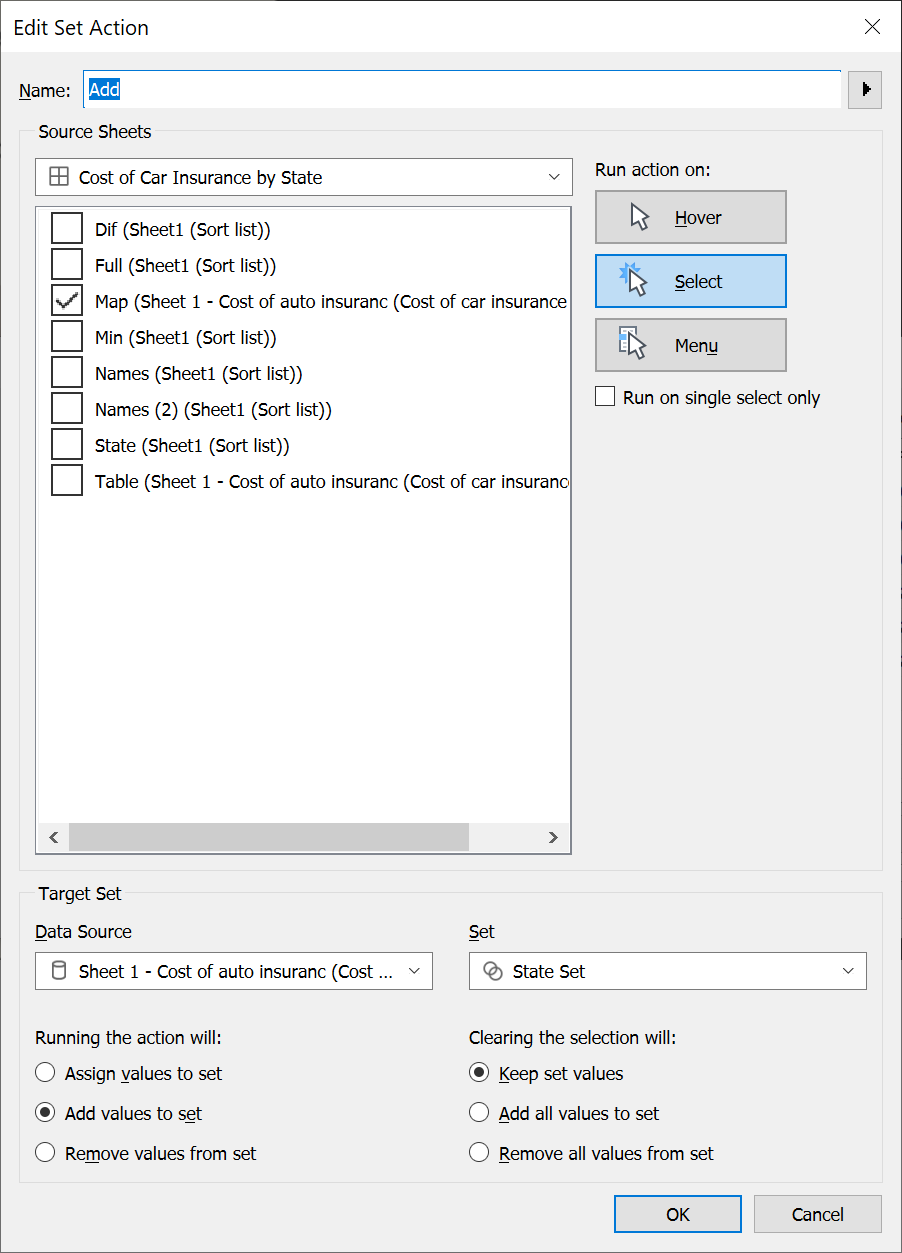 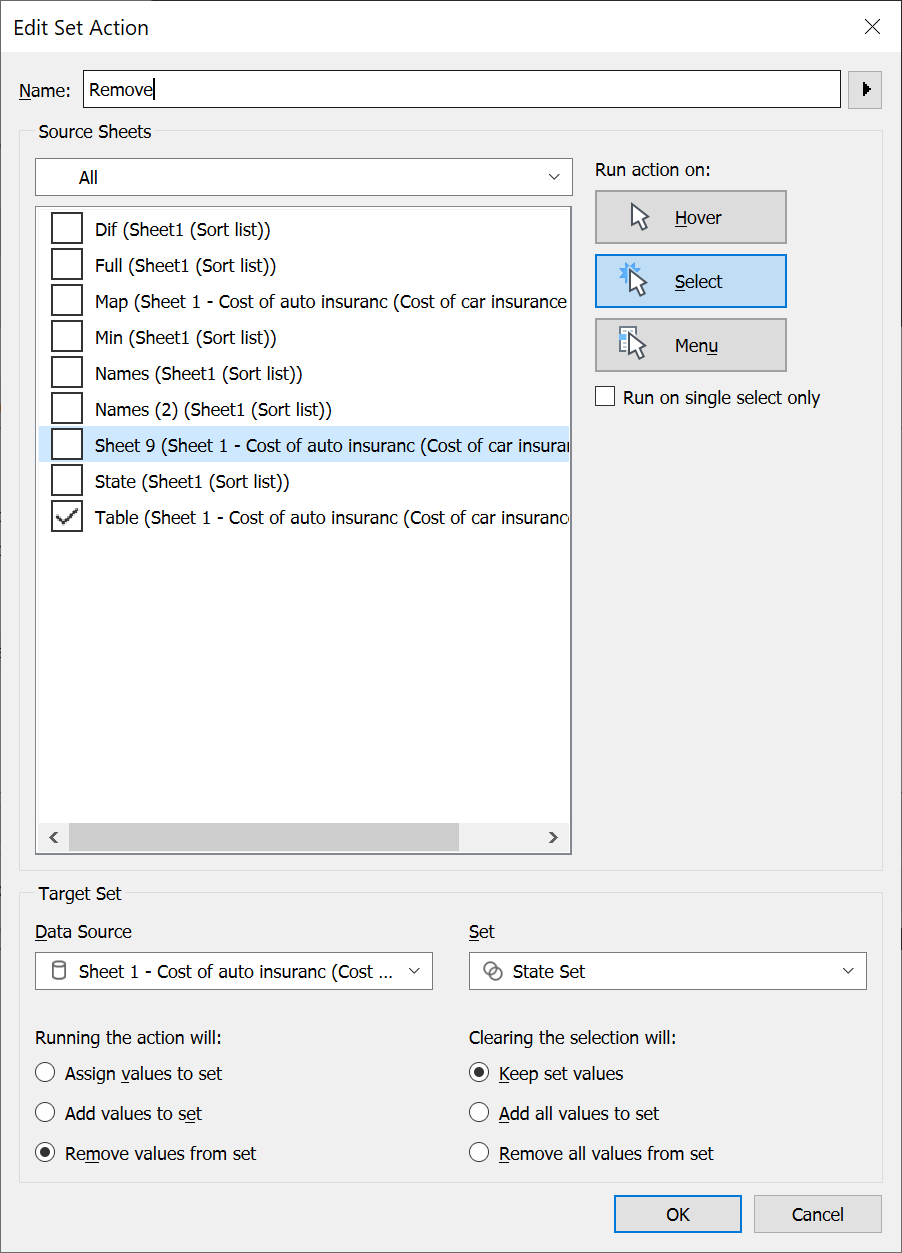 First output
The below .gif shows the Set Actions in action (no pun intended).

Responding to feedback
After publishing the viz, Sean Miller provided some great feedback on adding an option to let people sort the table.
To do this I had to do two things
The idea was that the user would select a heading to sort by and a line would appear underneath the label to show it had been selected.
The steps I took are below.
Excel file

Formula for sorting the table based on the Parameter.

On the table, sort the State field using the newly created Sort field 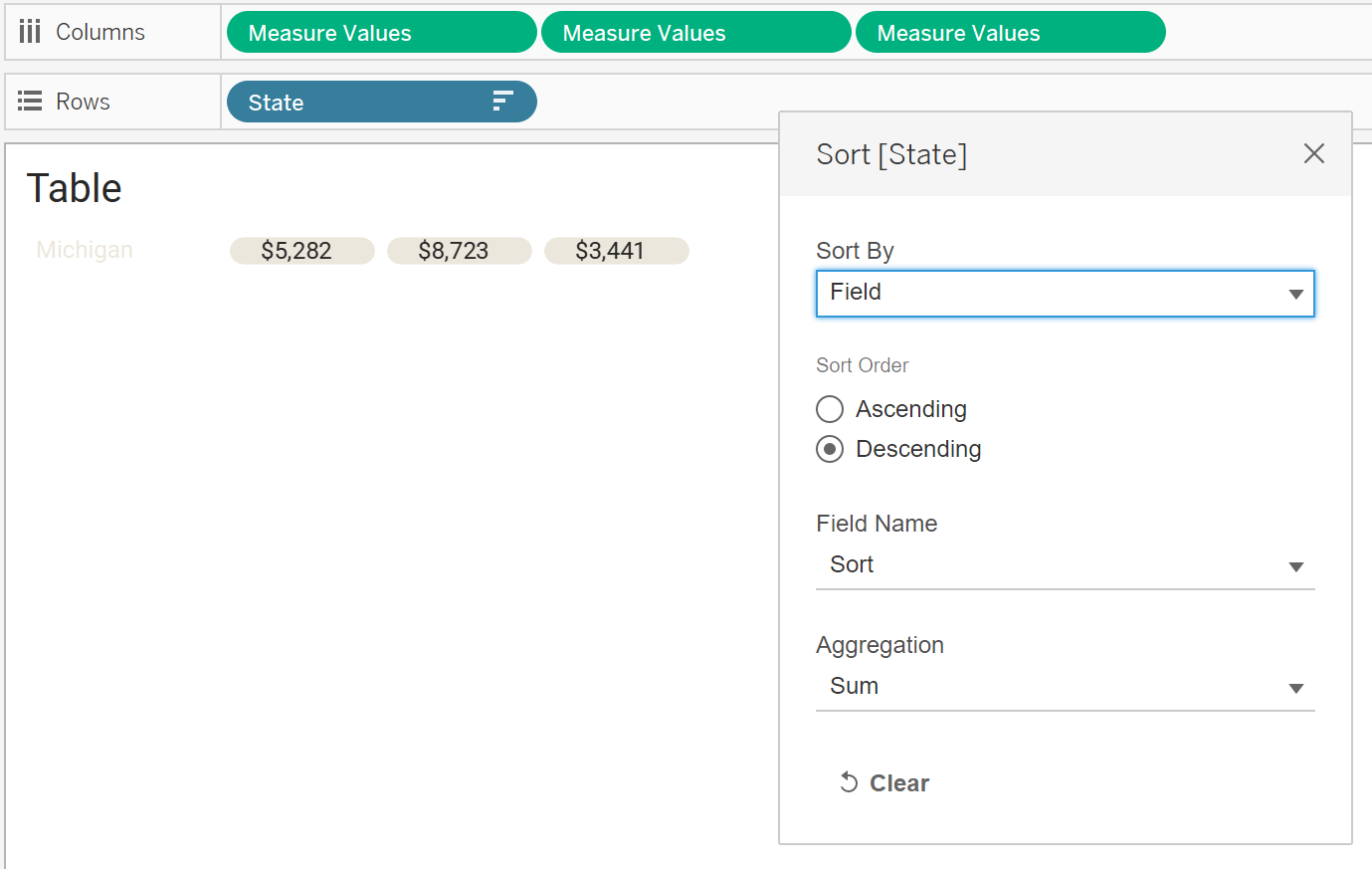 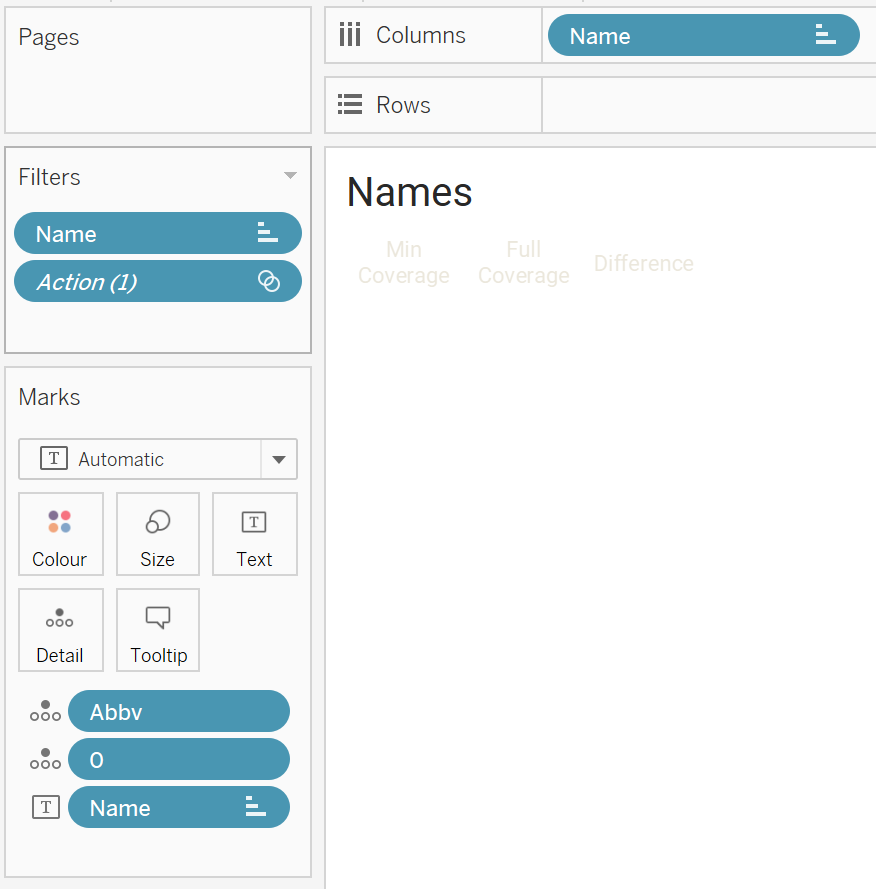 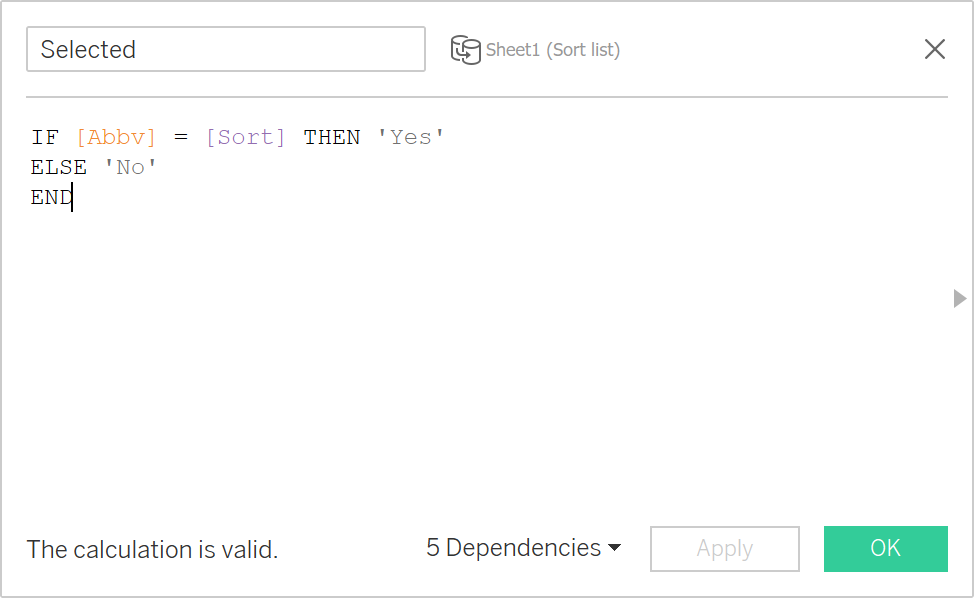 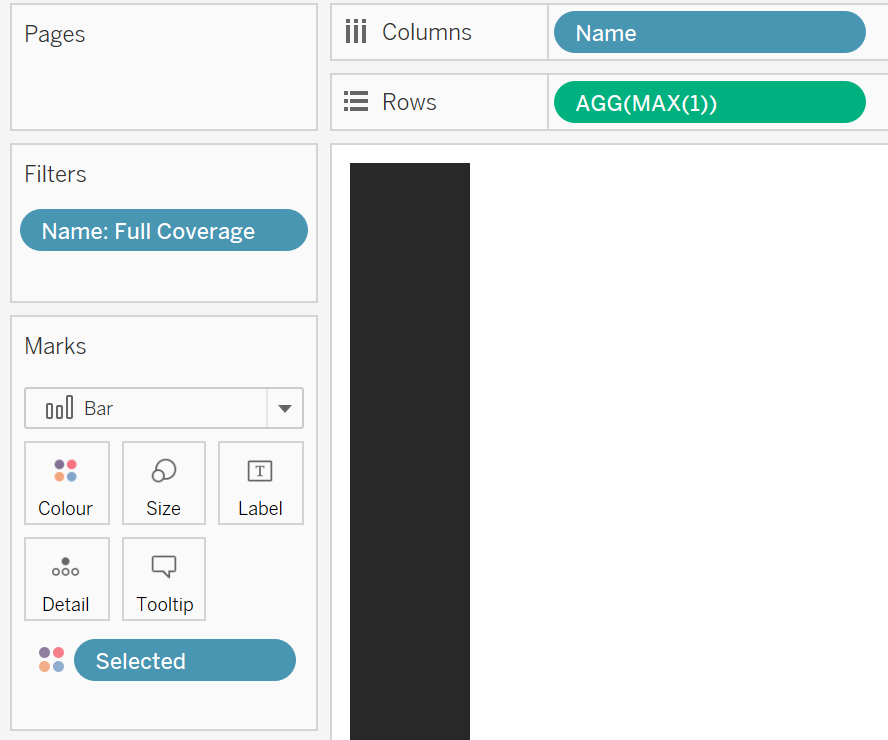 It was a bit tricky to add to the dashboard due to how far apart the State and other other labels were from each other, so I had to duplicate the sheets and filter accordingly.
The final step was to add a dashboard action to update the Sort parameter. 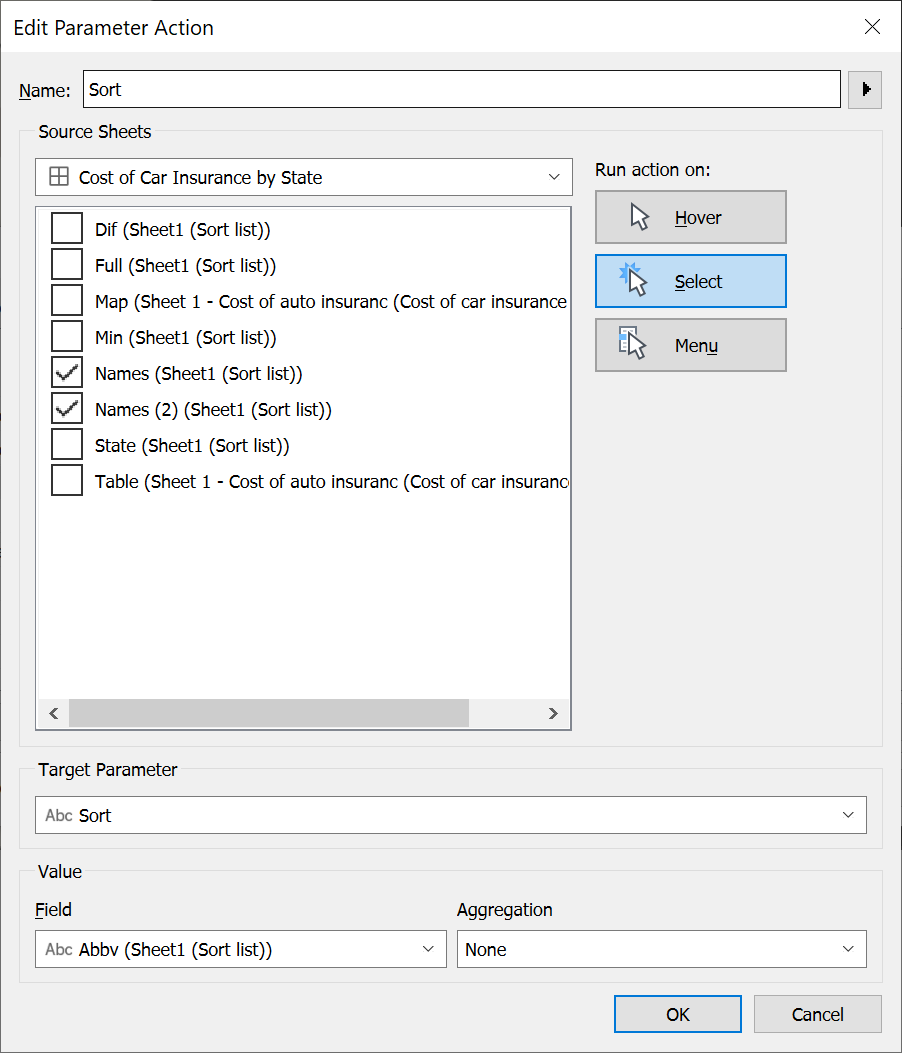 To prevent anyone from accidentally selecting the numbers on the table, I added a blank sheet over them.
Final result
You can interact with the dashboard below or view on my Tableau Public profile.
Makeover Monday Set Actions